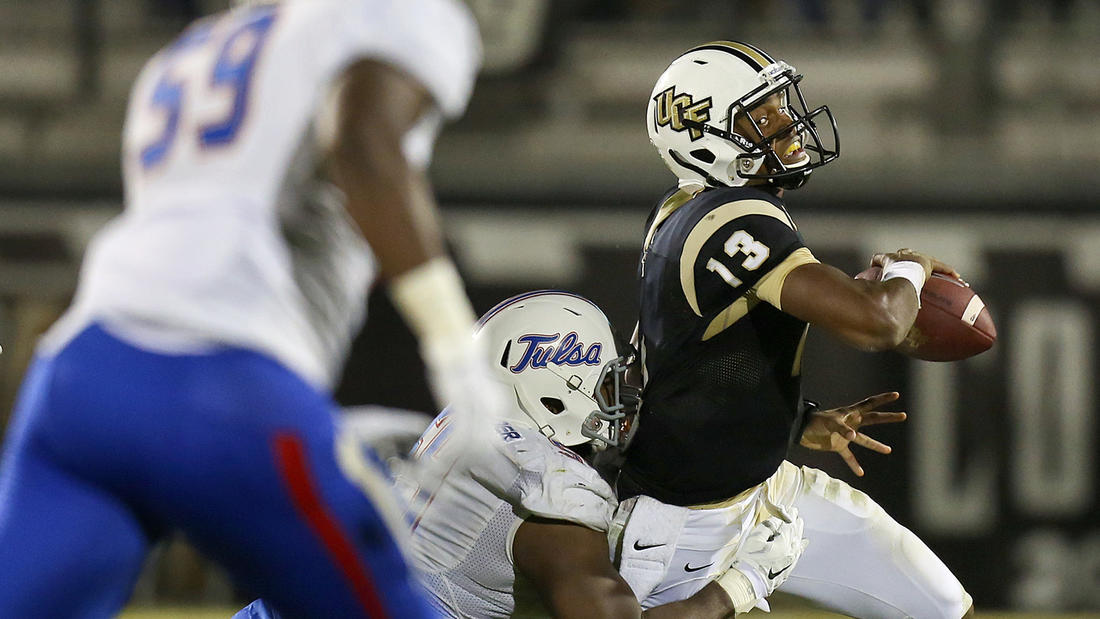 By viewing a college football game in some unique ways, one is able to think and analyze the way that media shapes our experiences of a sporting event. The University of Central Florida Knight’s home game against Tulsa’s Golden Hurricanes showcased media’s overall reflection of sporting events via pre-game, throughout, and post-game coverage. From commentator’s predictions on whom will come out victorious to what team member spotlight will be placed on, media is influential to the overall excitement of sporting events. Media coverage of sport is widespread. By listening to commentators, specialists and watching replays we improve our knowledge and understanding.

First I chose to analyze and find articles written before the game that showcased previews and predictions of what to expect out of the team’s matchup. ESPN’s article, titled “Old Foes Tulsa, UCF Meet for First Time in American”. The article touched based on the fact that UCF has lost their past 4 games against the Golden Hurricanes dating back to 2012, primarily seated conference games. What I’ve noticed is that media places a lot of attention on the coaches perspective. George O’Leary stated “Tulsa probably has the most tradition of anybody in the conference…. We haven’t beaten them in four games. That’s basically something that I discussed with the kids this week, and its something that we’ve got to get done. You’d like to see the seniors get that off their record before they graduate.” O’Leary spoke about tradition: one of UCF’s guiding phrases is “Tradition starts here”, and that was challenged with talk about Tulsa having the most tradition in the conference. The article posted on ESPN had a personal touch when they interviewed senior Terrance Plummer, “For sure, that’s the one team that whenever I’ve been in the conference that I’ve never beaten was Tulsa. That really weighs on you as a player…So this year is our opportunity to finally go out there and get that win as a senior class that we’ve never before done.” The article also mentioned what to look out for during the duration of the Friday night matchup between Tulsa and UCF which included: conference implications that could affect the American Conference standings and chances at a bowl game, the debate over if Tulsa’s quarterback Dane Evans is maturing or not this season, which team could take advantage of the first half, if UCF’s William Stanback could keep up his rushing averages against the Golden Hurricanes, and Tulsa’s wide-receiver Keevan Lewis being a complete, overall asset to their successful season. This kind of review and pre-game assessments aid in the overall understanding of the emotion that is to be felt during a live broadcast while also aiding in sports socialization. Fans are able to connect personally with a game coverage and stay involved in the sport.

With this information in mind and because I attended the game personally, I chose to watch the first quarter without any noise implications. I already knew the outcome, but I wanted to see first-hand if the restraint of commentary had me as a viewer feel any differently about the actions of the rivalry game. What I noticed was a lot of close-up videography on coach O’Leary, Blake Bortles who was attending the game alongside his former team members on the UCF bench, and celebratory cheering. 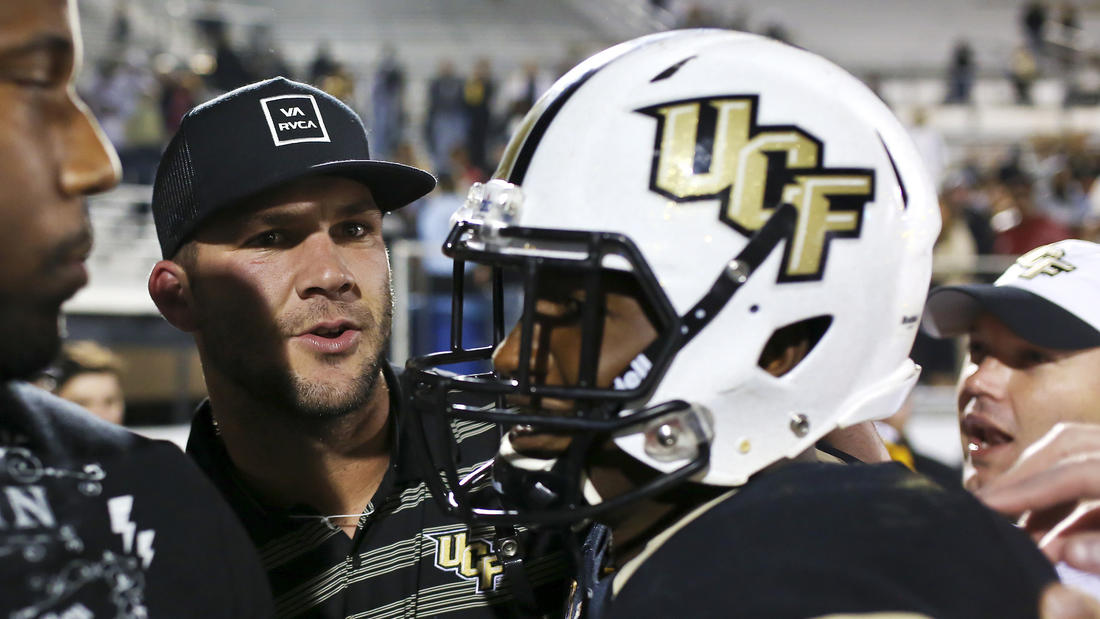 Numerous amounts of big plays were made during the first quarter, which were assured by the many slow-motion replays done for emphasis on the positive or negative reflection of a certain play. Whenever a pass was completed by Knight’s quarterback Justin Holman, more attention is placed on his individual reaction and celebration to the gain of yards signifying positive reinforcement that he had done a good job. The replay done 10:32 in the first quarter utilized ESPN’s technology highlighting and tracing the successful play action done by J. Holman to J. Warton for a gain of 20 yards. This drawing done on the replay allows the viewer to see, first-hand, how the play was initiated and what players were key in making sure the gain was successful. The celebrations made by either team also allowed for the viewer to connect with the on-field emotions. When Tulsa’s D. Alexander and J. Uwaezuoke sacked UCF’s J. Holman with 1:26 in the first quarter, the Tulsa player’s high knee run and dancing made me as a UCF fan disappointed. Having had to limit myself by muting the broadcast, I was unable to use the senses that I would typically rely on for a sporting event. The excitement was limited without the background noise of the fans or sport’s commentator’s reviews of plays or focus on individual players.

I watched the second and third quarter with commentary on to get a more in-depth understanding of the effects done by sound on the excitement of the broadcasted game. The Knights versus the Golden Hurricanes was broadcasted at UCF home, Brighthouse stadium before an announced crowd of 35,323 fans including UCF alum, Blake Bortles. Every time that the UCF Knight’s scored a touchdown the UCF band would begin to play the war chant echoed by the large crowd of fans. During the replays, the commentators would congratulate the individuals who successfully administered plays. With 8:09 left in the second quarter, J. Holman fired a long shot to J. Reese for a 77 yard pass completion for a touchdown, putting the Knights up 17-0. During the replay of the game, the commentator stated, “another big play from Justin Holman, another big play given up by the Tulsa defense.” This statement both highlights positive and negative reinforcement done by ESPN. During another big play in the third quarter, Justin Holman completed a 25 yard pass to B. Perriman in which the sports announcer stated, “boy that was just too easy.” This comment made it seem that the completion of the play and the overall action of being a football player is attainable even for someone who is just an analyst. Aside from the commentators analysis of plays during the game, they highlighted both team’s coaching staff and individually highlighted George O’Leary’s strategy’s.

The post-game analysis that I chose to focus on was titled, “UCF’s Justin Holman helps lift Knights to 31-7 Revenge Win over Tulsa.” This title alone puts praise on sophomore quarterback for the Knight’s Justin Holman. Although he didn’t have a preconceived feeling of payback for the Golden Hurricanes, he made it possible for the Knights to overcome the previous rivalry. Touching base on the article that I read for the pre-game predictions, this article started out by stating that UCF needed to wipe the bad taste of defeat out of its mouth, and Tulsa provided the perfect dose of sweet victory. Although media is meant to be un-biased there is no arguing that the competition was the perfect concoction for UCF to come out victorious. The entire article, published in the Orlando Sentinel focused on Holman’s positive team moral by resetting the momentum of the game and leading the Knights to be triumphant. The article ended with a quote from J. Worton, “The main focus of our season is to win a conference championship, and [Tulsa] was just in the way, but beating them is something that’s gonna go with us for the rest of our lives, so it’s nice.” 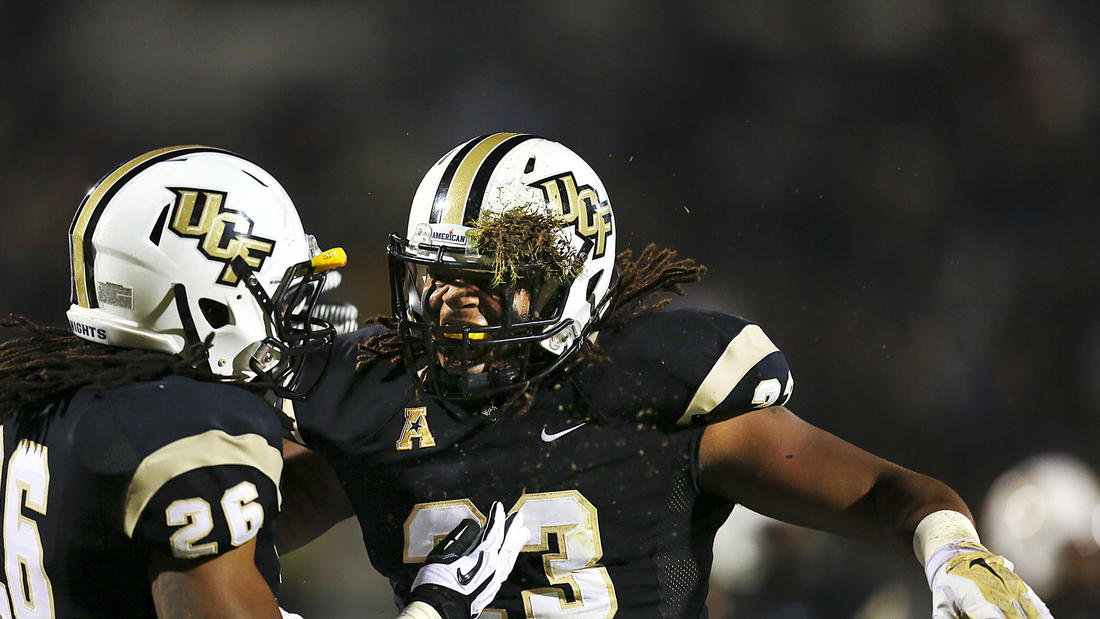 The kind of review poses a conflict of interest when it comes to a review of a sporting event. When the media loses their perspective on journalism, it leads to a more biased referendum. But when it is their own product (an Orlando paper reporting on an Orlando team) can that really be considered critical and objective? Is it unfiltered editorial or are we just reading an advertisement done?

It was apparent to me that this game between the UCF Knights and the Tulsa Golden Hurricanes was exemplary of the affects that commentation and analysis has over the overall enjoyment and understanding of the game. Comparing the feeling that I received by watching the game in person, at the stadium, versus reading and analyzing pre-game reviews and listening to commentator’s opinions affected the enjoyment and understanding that I had for the previous rivalry, emotion felt by the team, and complete enjoyment attained from the game. Everything in sports media is carefully analyzed and planned in order to keep fans entertained and happy, from the camera angles to the commentators and even which athletes are highlighted. The imagery they choose to feature is the ideals and ethics in sports, dedication, pushing through the discomfort, heterosexual masculinity, and heroism. Images displayed by the media in sports are a carefully scripted narrative to sell entertainment to the consumer rather than portraying the reality of sports games and competitions. Viewers even believe that the broadcasting of the game is realistic. With the Internet and other mass media outlets, sports are able to reach the viewer in entirely new way on a more personal level than ever before, transforming our experiences.